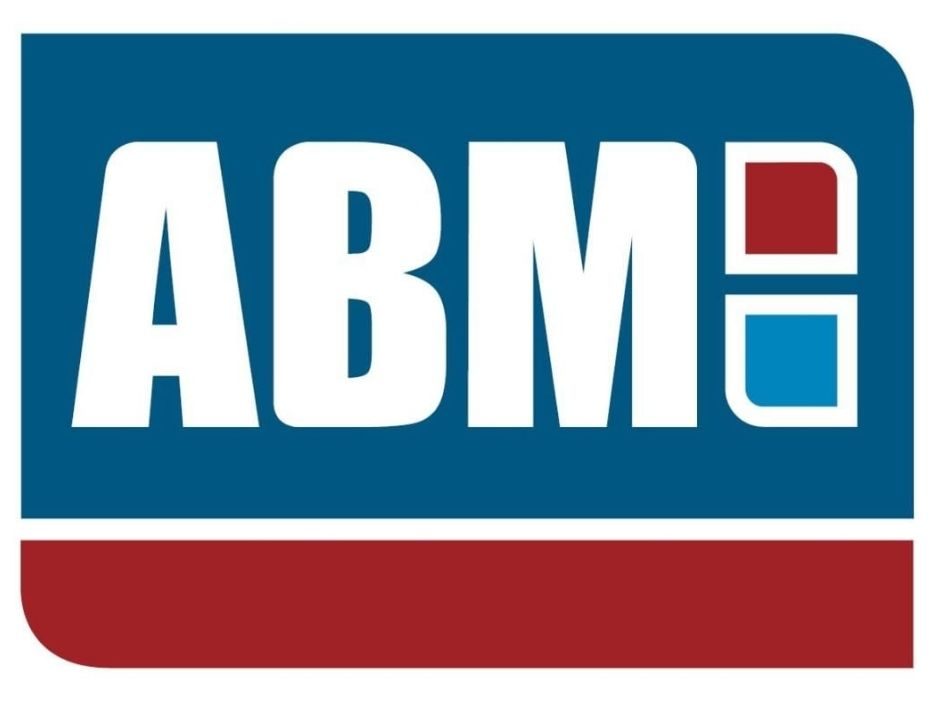 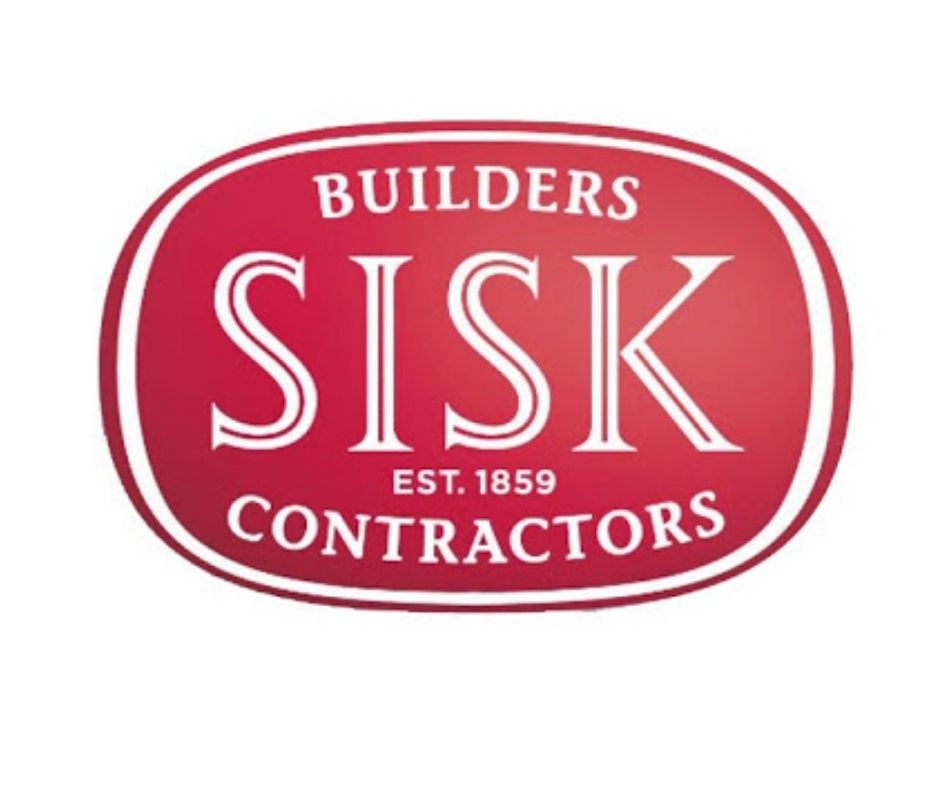 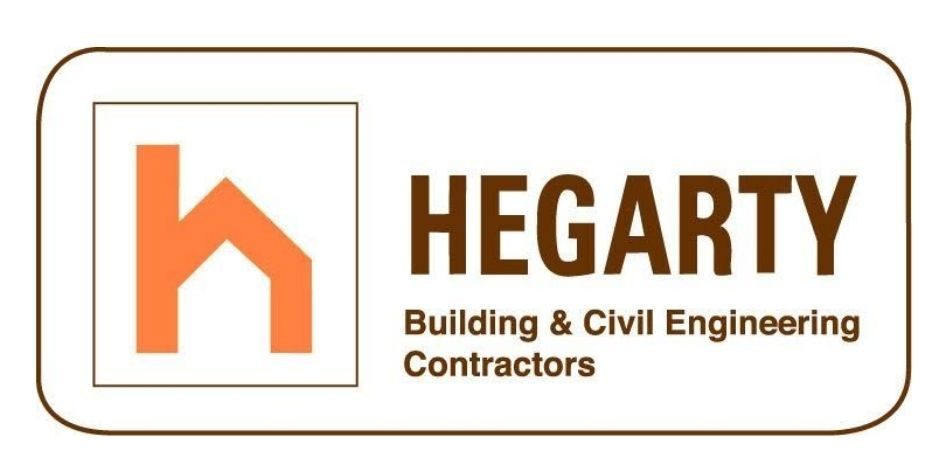 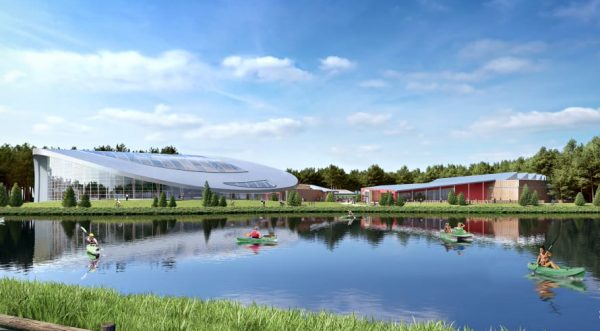 The site is situated within the commercial woodland on the expansive Newcastle estate, just five kilometres from Ballymahon. The Village has been carefully designed to be sensitively set within the woodlands with minimum impact on the existing wildlife, flora and fauna. The forest resort includes 466 self-catering lodges and 30 apartments to accommodate up to 2,500 guests. Center Parcs offers an exciting range of indoor and outdoor activities. 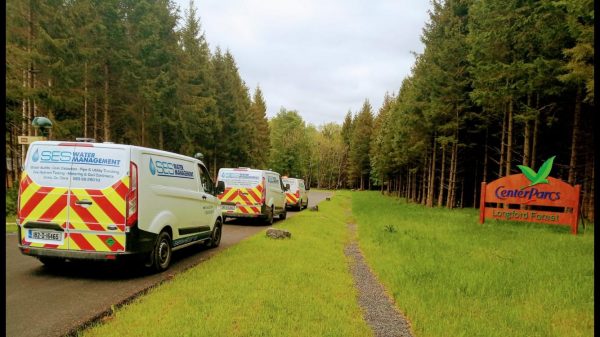 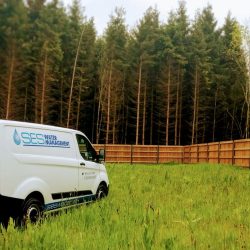 SES Water Management in partnership with MGD Civil were requested by Roadbridge & Edmond Shipway Consultants to manage and complete the Sterilisation of the entire Fire, Cold-Water Network and Clear Water Valuts prior to the opening of the New Center Parcs development in Ballymahon, County Longford.

The works planned out over many months took place over a 3-week period at the end of April/early May in 2019. The main body of works were completed over 7 continuous days and involved a work team of over 40 Personnel managed by SES.

All works and a full handover of all reporting was completed by the 10th May as per our programme of works. The entire project from start to finish ran smoothly and was well planned and executed. 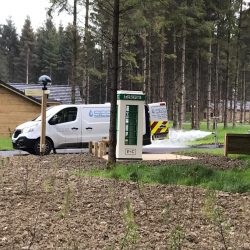 Excellent work by the SES Team – Well done to all involved, Reward for months of preparation!

Thanks to SES for all their hard work on the Center Parcs Project. I found them very easy to deal with and all works were executed to a very high standard with minimal disruption to other works on site. 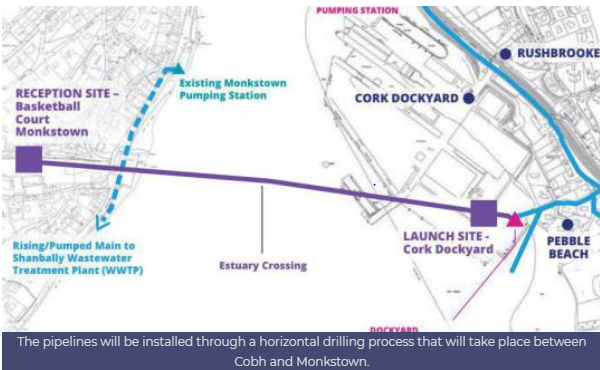 Two pipes installed under the River Lee Estuary between Cobh Dockyardand Monkstown as part of the estuary crossing. The pipes were installed using horizontal directional drilling construction technique to reduce disruption to residents, businesses, and road users and with the least environmental impact. Once the Cobh networks contract is complete in 2021, all of Cobh town’s wastewater will be connected to the Shanbally plant by the estuary crossing pipeline for treatment before its discharged to the harbour.

SES Water Managements were tasked with carrying out the Hydrostatic Pressure Testing and swabbing the two sections of the pipelines made up of 1066m of 500mm SDR9 HDPE pipe, SES carried out swabbing, filling and pre-tests to each line on the land at Monkstowns side after Butt Fusion welding together, once each line was pulled through the new sleeve drilled under the river bed from Monkstown to Cork Dockland, SES then re-swabbed and filled the line to carry out final hydrostatic pressure testing. Testing, analysis and reporting was completed by January 2020 of line 1, Line 2 completed by April 2020 / May 2020. 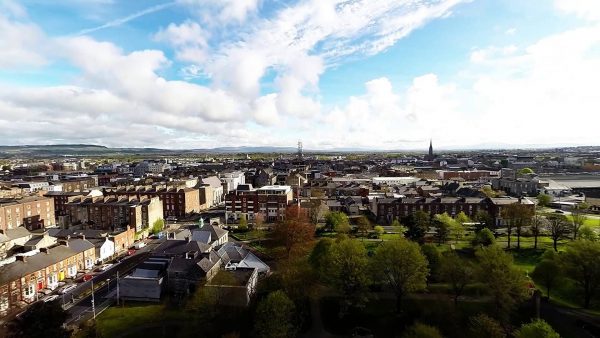 The peoples park DMA is located in the centre of Limerick City. The DMA is supplied via a Trunk mains and has almost 3000 customers connections. This DMA was extremely populated with a complex network and some properties supplied via backyard suppliers. It was suspected that significant leakage was due to leaks on old backyard supplies which were unmetered. This made for a very challenging leak investigation survey as temporary meters needed to be lifted to all known supplies where possible and where this was not possible needed to be step tested to determine if leakages existed.

The following items set out the scope of works undertaken in the Peoples Park DMA.

Following leak detection works in the DMA, we successfully identified a total of 40 leaks. Seven of these leaks were mainline leaks, six were leaks of the feeds to properties and twenty-seven private side leaks were identified. These leaks were accounting for an estimated leakage as shown in the table below. 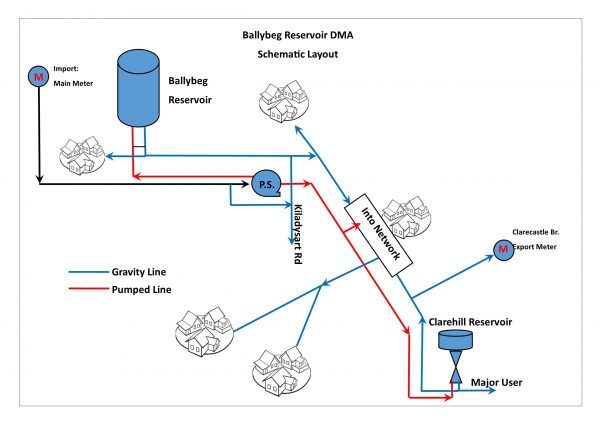 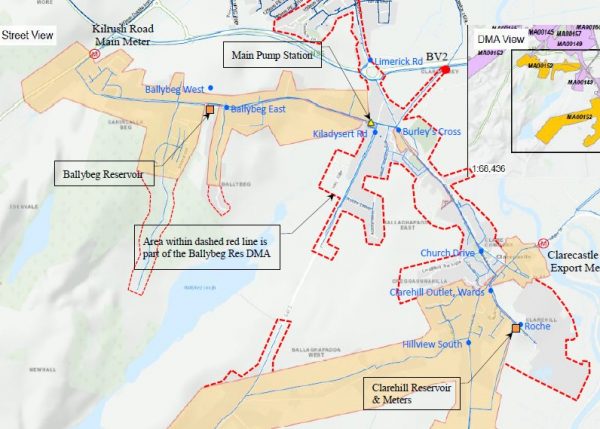 The Ballybeg Reservoir DMA is a combined pumped and gravity system. Water enters the system by gravity through the import meter and gravitated to the main pump house. Water is then pumped to both the Ballybeg and Clarehill reservoirs and is also pumped into the network. When the reservoirs are at full capacity, the pumps turn off and water then gravitates out from both reservoirs and into the water network. This was a complex water system with multiple reservoirs and pump stations, mains serving as both pumped and gravity pipes and a large 24hour industrial user. This made for a very challenging leak investigation survey particularly when planning the step testing works.

The following items set out the scope of works undertaken in the Ballybeg Reservoir DMA.

Combining the leakage estimates, the total Baseline leakage for the DMA was estimated at 745.9 m/day.

We would like to thank the staff at Clare Co. Co. for their assistance with setting out the step testing plan, identifying the appropriate valves and providing valuable information on the overall operation of the DMA.

Following a survey of the hotel and an analysis of their current usage we were able to put a proposal together which clearly showed them the steps involved, the investment and most importantly the short payback periods. 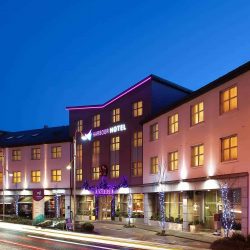 Following a discussion with the hotel the project was approved and the work commenced.

We introduced water saving shower-heads into all the hotel bedrooms, resulting in a drop in water usage of over 12 litres/minute per room. We also installed water saving aerators to all the taps in the hotel cutting the water usage from over 15 lit/min down to 3.5 lit/min. The other areas we looked at were the urinals; we installed urinal management systems on the troughs within the main bathrooms. We also reduced the consumption within the kitchen area by introducing spray guns and kitchen aerators.

“The fact that we were able to install their products ourselves so quickly and easily made it an easy decision straight off. We have seen a 60% reduction in our water consumption based on our old consumption rates. We were delighted with the products supplied by SES and would recommended them to other hotels as a result.” Said Geoff Kinsella General Manger, The Harbour Hotel, Galway.

As a result of one of the coldest winters ever recorded, water shortages were experienced throughout the country. To help with locating and pin pointing the major underground leaks caused by this cold snap SES were called on by Galway County Council. As part of our work for the Council we setup loggers on the meters to measure the profile of the usage in each DMA.

Taking the data from these along with profiles from the key MAG Meters we were able to quickly establish the areas with high water loss or unaccounted for water UFW. Working on these areas we carried out step tests using correlators to establish the position of leaks on the mains, we then used ground microphones to pinpoint the leaks. We also surveyed other areas that are prone to leaks during a bad frost, including house connections, stop cocks and meter chambers. Taking a look at the town of Gort, when we commenced works there the plant was at maximum capacity with an output of 106 m3 per hour. Over an 8 day period as a result of leak detection and repairs this had reduced to 56 m3 We pinpointed a total of 5 leaks on the water main around the town along with numerous smaller leaks on house connections, stop cocks, business connections, etc… As a result of this we are still carrying out work for the council on a regular basis and are also supplying them with water auditing equipment, such as loggers and reed switches.

“We are very pleased with the services provided by SES over the past number of months, they are one of our preferred contractors to call on for emergency works in the future”  –  Derek Pender, Galway County Council.

Over the past 12 months SES have carried out a number of cost saving projects within Essilor Ltd (Organic Lens Manufacturing) on the Gort Rd, Ennis, Co. Clare. The plant which has over 400 people working in it uses a large volume of water in its production processes, but it also had a high consumption outside of that area, this was the area we focused on reducing at the start.

Looking at the toilet areas, we introduced water saving devices to help reduce the consumption these included, Water Saving Push Taps and Aerators, Thermostatic Mixing Valves and Waterless Urinals. Along with reducing the water usage dramatically, the introduction of the mixing valves has also resulted in a saving on heating costs (Hot Water). As part of the plants inspections on their water ring main, we installed flow and pressure loggers for a period of 10 days to get a profile of the water pressure this also helped to rule out the risk of a leak on the site.

The next project SES looked at with the client was an internal Water Mapping of all the water piping within the plant. This was completed on site and involved carrying out takeoffs of all the water piping from its source straight through to all the holding tanks and/or to its end use in the processes. Following this a drawing of the layout was produced along with a report with suggestions on where to make alterations like introducing a meter, a valve, etc…

The latest project SES is looking at with the client is the feasibility of introducing a Rain Water Harvesting System for the plant to help reduce their consumption even more.

One of the latest cost saving projects being employed in Limerick’s Thomond Park Stadium, is a plumbing innovation that might prove to become one of their most influential.

As part of Thomond Parks drive towards reducing their overall usage of water and energy they have introduced a Waterless Urinal System throughout the stadium.

The project completed last year in two phases involved the retrofitting of all the existing urinal bowls and troughs with our waterless system. A total of 116 urinal units have been retrofitted with the new waterless technology. The key difference between this and a conventional urinal is the patented waterless sleeve below the drain – in an easily replaceable form – that fully seals the outlet to anything but liquid. This sleeve (Waterless Valve) replaces the traditional trap found in all water urinals.

“Thomond Park Stadium has experienced over 50% savings in its water consumption through the use of dry urinals and other water saving initiatives at the Stadium. The dry urinals were a good fit with the water conservation programme and have proved very successful. The ease of maintenance and the water savings in the cleaning of the urinals makes this system a very effective water conservation measure.” – Colm Moran

“With clients such as Thomond Park now employing the waterless technology so effectively and with such an impact environmentally, we believe it is only a matter of time before this specification becomes preferred policy. Energy and water saving is now critical to any company in Ireland particularly with the ongoing issues with water shortage. We already have a number of other sites using the waterless urinals that are experiencing substantial savings and cleaner, fresher washrooms.”  – Michael Lyons.